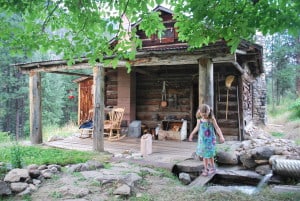 Salmon is a place of 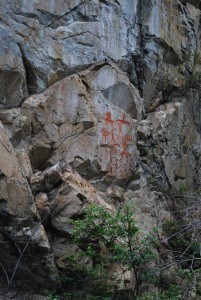 solitude and connection. A refuge for wildlife, our own human species and a place to ponder our past, revel in the present and consider our future to ourselves and the natural world. History buffs, seekers of wild places, wildlife watchers, river-runners, hikers and those desiring the opportunity to share cherished time together will find the Main Salmon River a place that adds to their own history while also contemplating those and the landscape that has come before us. For thousands of years Natives, miners, trappers, boaters, explorers, hunters, hermits, and homesteaders have come to this land and this river. Many legends, stories, successes and failures have left their mark. If the river could speak …

» View a map of the Salmon River 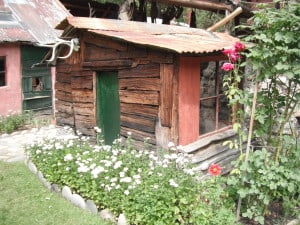 The Salmon River has been inhabited for almost 10,000 yrs. Evidence of human presence includes a rare leaf shaped Cascade point. This is a distinctive bi-pointed lanceolate and is a characteristic artifact from the Old Cordilleran culture. This culture was a late Pleistocene people who inhabited the Pacific Northwest during this time. Their subsistence was based on hunting, fishing, and gathering. The Nez Perce (Niimiipu) tribe are their descendants. In 1800, the Nez Perce had more than 100 permanent villages throughout Idaho, Montana, Washington and Oregon. Archeologists have identified nearly 300 sites in the Salmon River Canyon, including both camps and villages. In 1805 the Nez Perce were the largest tribe on the Columbia River Plateau, with a population of about 12,000. The Nez Perce were a semi-nomadic people and would travel seasonally to search for abundant food sources. The Main Salmon River was treated and regarded as sacred ground and was a rich source of food for the indigenous people who relied on the abundant salmon species. Before the modern era of hydro dams, the Salmon River provided 45% of the steelhead trout and Chinook Salmon for the entire Columbia watershed. The Mountain Shoshone, also known as the Sheepeater Indians, have a similar history within the Salmon River Canyon.

In 1805 William Clark was the first known Euro-American to meet the Nez Perce. The Nez Perce Indians were pivotal to the success of Lewis & Clark and their journey across the Bitterroot Mountains and to the Pacific Ocean. Sacajawea, a young Shoshone woman who was born around nearby Salmon, Idaho, was a vital and significant authority assuring the mens survival and communication with Indian tribes. Prior to crossing the Bitterroot mountains, Lewis and Clark attempted to venture down the Salmon River, but found the waters and canyon too rough to navigate.

The first white men to travel the river canyon were trappers and hunters in 1832. In the 1860’s, placer deposits of gold were found along the river, and a gold rush began. In the late 1800’s a man by the name of John McKay would build a small wooden scow in Salmon, Idaho and head down river with months of supplies placering for gold at sandbars and side streams. These boats were then dismantled to construct cabins and were never used as watercraft again. Hence, the Salmon River earned its name and reputation as “The River of No Return” from these one way downriver journeys and from the surrounding expansive wilderness and the 6300 ft deep canyon cut by the Salmon River.

In the late 1800’s and again in the early 1900’s, railroad companies surveyed the river as a potential route to the west with both attempts proving too impractical. Hard rock mining began in the 1880’s increasing the demand for the wooden scow boats which could provide the mines with the necessary machinery. In the late 1800’s and for almost 40 yrs, a man by the name of Captain Guleke dominated the navigational history of the Main Salmon. He would build his 32 foot long/ 8 foot wide wooden scows in Salmon, ID. He would then provide river passage for people and supplies and upon reaching Riggns, ID the boats would then be dismantled for homes, buildings and other practical uses. River navigation continued by various means and in 1947 Glen Wooldridge became the first man to run a motor boat up the river. The boat was 22’, made of plywood, and powered by a 33-hp outboard Evinrude. Around the same time period the first commercial recreational trips down the river began.

Several pertinent, heroic and tough women left their mark on the Salmon River. These women include Polly Beamis who was a Chinese slave turned homesteader; Reho Wolfe who raised her family of 8 children in a cabin on the river and fought the state of Idaho for her right to ‘homeschool’; Frances Zaunmiller who fiercely lived and worked at Campbells Ferry from1940-1986 and many more hardscrabble and resourceful women. Several resilient women and men still call the Salmon River their home year round.

With the increased use of the Salmon River Country becoming apparent, in 1931, 1,090,000 acres in Central Idaho were declared by the U.S. Forest Service as The Idaho Primitive Area . This began the political and public discussions about land and water use in this remote area. It was not until 1980 that the United Sates Congress created the The Frank Church-River of No Return Wilderness Area in Idaho. At 2.367 million acres it is the second largest protected wilderness area in the lower 48. Senator Frank Church, whom the wilderness is named after, served as a U.S. senator from Idaho from 1957 to 1981. He collaborated and worked tirelessly to protect and preserve this Wilderness area. Senator Church was one of the floor sponsors for the national Wilderness Act in 1964 and sponsored the Wild & Scenic River Act in 1968.

Joining SOAR Northwest on a weeklong river trip enables one to be a part of and connect with the great history of the Salmon River.